Growing up, out in the west Texas town of Odessa, sounds like a Marty Robbins' song. Out there we were, almost 300 miles from El Paso, and a little more to Ft Worth. I was born on my grandparent's farm near DeKalb in east Texas, and my parents moved to west Texas for work in the oil boom of the late 40's. My dad began driving trucks for Phillips Petroleum. 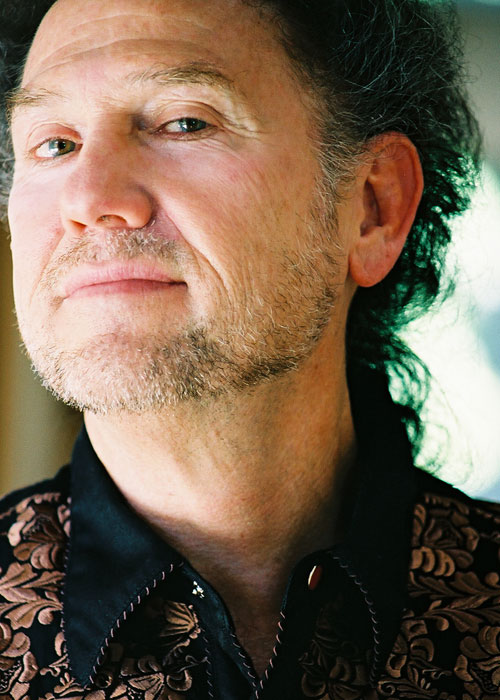 I never met my dad's parents before they passed on, but like millions of Americans, they had difficult times during the Great Depression. Dad told me his father was a circuit preacher in east Texas, near Clarksville, and that he was still in grade school when his mother died. This created a hardship upon the family and my father was unable to complete his schooling.

Both my mother and grandmother were women of prayer. This was to become very important in my formative years. In the early 50's our family began attending East Side Baptist church when I was very young. Not long after, my father gave his heart to the Lord Jesus Christ. I later accepted Christ as my Saviour at the ripe old age of 11 and was baptized during a week long revival there. The Evangelist's name was Paul Carlin. And for some reason, I was moved by his testimony of God saving him from drug abuse.

Part of God's plan, in my life of music, began one Saturday when I was 9. A man from the Dunnigan School of Music (Lubbock, Texas) came walking the dusty roads of our town. He was knocking on doors, asking if anyone might be interested in learning the Hawaiian Steel Guitar. Many enjoyed the trans-Pacific radio show, Hawaii Calls, around 5 or 6pm every Sunday evening. At that time, I didn't even know what a steel guitar was, but I did relish my time playing sand lot baseball.

I did take group lessons. My teacher was Al Petty, a Godly young man who was still under 21 but was a steel guitar genius. One day, I was "ad libbing" during our class performance of an assigned tune. Immediately, Mr. Petty asked me to stay after class in his office. And furthermore, he wanted my father present as he arrived to pick me up. I thought "Well, I guess it was fun while it lasted ".

Several things happened that day that changed the course of my life. At that meeting in his office, Mr. Petty told my father ... "Mr. Perkins, your son has an ear for music. If you can afford to give him private lessons, I can teach him faster to play by ear instead of the Tablature." My father did not hesitate, He said "Yes". This led to my father taking Spanish guitar lessons, in order to accompany me better. In turn, it also led to an opportunity for me to play Talent Shows and perform as a student representative, with Al Petty, all around the west Texas Jamborees with his band, the Bill Myric band.

God is always at work behind the scenes in our lives. Bringing us along even when we're not aware. Another real blessing came with the advent of pedal steel. I'm still not sure how my parents managed this, but circa 1958, when a dollar had much more value, my parents laid out $1000 so that I could have the first Fender model 1000 pedal steel guitar at Mr Potts' music store. Immediately, it placed me in demand by all the Country & Western groups.

In 1962, my interest in playing the electric guitar was growing fast. By then, I was working after school at Tucker's Precision Machine Shop and had my first car, a red 2 door hard top Chevy Impala. I heard some guys playing a Ventures song in one of Permian High School assemblies. Since my brother had not shown interest in a Gibson Les Paul Jr. my parents bought for him, I began to ask dad how to make chords on it. That led to me forsaking the pedal steel, and the popular Western Swing movement, for a bigger amp and Stratocaster guitar.

Later, when I enrolled into Odessa Jr. College, I played rhythm guitar for school assembly and met a drummer named Pete Lair. Pete said he was involved in a new band over in Midland, Texas, just 18 miles away. I went over and played with them and they asked me to join. I did, and the band became The Mystics. Great fun along with guitarist Dennis "Wemus" Grubb playing dances all around West Texas!

By 1968, I had been through active duty training for the Army National Guard. I took Basic Training at Ft Bliss, El Paso, TX and Advanced Infantry Training at Ft Knox, Kentucky. I had just taken a job in the Odessa office of an oil field supply company called Darbyshire Steel Co. when an opportunity came to go to California with a very popular west Texas group, the Sparkles. I came back to Texas in 1969 to form a band called Foxx, and back to California in 1970 with a band called Shiloh, from east Texas.

By 1971, I was asked to join the Flying Burrito Bros. By the end of that year, Stephen Stills asked Chris Hillman and me if we wanted to form a new group ... we did, and it was called Manassas.

It was during 1972 that I went through a divorce and became aware of the spiritual part of my life. Primarily that I had starved my spirit, and had restricted my spiritual growth. The Lord prompted me to begin reading The Living Bible (an easy to read paraphrased edition). The Holy Spirit quickly taught me about God's ways, His Truth, His Love and most importantly, His Son, Jesus Christ!

I met Don Abshere through Fred Walecki at his music store in Westwood, CA one day. He had a big smile with that big moustache and said, "We've met before ... I was the drugged out hippie who MC'd your show with The Flying Burrito Bros at a club in San Diego last year, I hear you're looking for a good church." He told me about a tent meeting in Costa Mesa where hundreds of hippies were getting saved off the south beaches and coming to the Lord. I told him I would be sure and attend after our tour.

I arrived at the tent, what was to become Calvary Chapel. It was packed out with many people standing in the back. I saw this long hair rock band onstage and pastor Chuck Smith teaching "straight to the heart" life principles with the "Joy of the Lord" on his face. Due to my very conservative church experience, I liked the rock music but was frightened at first about it being in church! Toward the end of the service, I wanted to see if I could find Don Abshere in the throng, so I walked back to the standing crowd and asked the first person I came to if he knew Don. He said "Sure, he's my room mate, he's standing right over there"!

Don greeted me with that big moustache smile and I thanked him for telling me about this wonderful meeting. I said, "I really like it here, how can I join this church?" He laughed and said, "You can't join this church!" Stunned, I replied (thinking he must know something about me that I hadn't told him), "Why not!?" He answered, "You're a Christian aren't you?" "Yes" I said. Then he explained, "Well, If you're a Christian, you're already a member!" To which, I responded, "That's cool, I like that!"

Our lives take many twists and turns, and there's much we may not understand. But if we allow Jesus to reign upon the throne of our hearts, we can experience real hope and change. He is the only One who gave His sinless life for us so that we may live forever with Him. At the point of surrendering our lives to Him, that very act of faith and trust begins our new life, Born Anew! He will guide and protect you. All the guilt and shame that sin brings is washed away by the shedding of His Precious Blood on the Cross.

If you desire an answer to your challenges in life and you desperately want peace which transcends all understanding, it's free for the asking! Jesus Christ is the Prince of Peace! Unlike all other religious figures, His is an empty tomb. He was crucified, died, and was raised to bodily life again on the third day, conquering death forever for anyone who will believe in and trust Him as LORD and Saviour! Amen

What others have said ...

"... Al Perkins could play a pedal steel and sound as good as every great guitar player alive ..."

"The most influential dobro player in the world."

"You play a style like no other ... and very soulful!"

"He is the best country-rock guitarist I've heard!"